We are all frogs

The parable of the frog and boiling water is hundreds of years old. It has been used throughout history as a metaphor for circumstances in life when people are unable to see gradual change around them.

The story goes that if you place a frog into a pot of boiling water it will jump out. However, if the frog is placed in a pot of cold water that is gradually heated to a boil, the frog will not perceive the danger, thus remaining in the pot and getting boiled alive. It illustrates that slow or gradual change is largely ignored. Or else we're slow to adapt to it until it is too late. 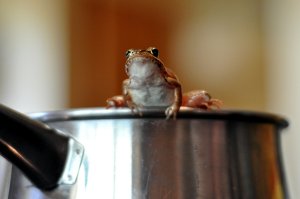 The story underscores the frog’s instinct for sensing sudden threats and changes in its environment, and how that instinct fails the frog when confronted with gradual change, eventually getting overwhelmed by those changes.

Many believe this parable is a fitting analogy for the climate change narrative happening in our world today.

Last week, NASA announced that August was the hottest month on record since record-keeping began in 1880. It marks the eleventh straight month to break the previous monthly heat record. Every month since October 2015 has set a new monthly high-temperature record. It is the continuation of an alarming trend that saw both 2014 and 2015 set new heat records, and 2016 is on pace to be the third record year in a row.

There is no disagreement over the fact that carbon dioxide traps heat, and too much CO2 in our atmosphere is increasing the earth’s temperature, and as a result creating great risk to the planet and all life that inhabits it. Ninety percent of the heat trapped by greenhouse gases goes into the oceans, warming them to the point of affecting global weather patterns--causing more powerful storms, and creating serious consequences for sea life.

Ninety-seven percent of climate scientists agree that the buildup of these heat-trapping greenhouse gases is man-made due to human activity from the burning of fossil fuels.

The science is not in doubt. What is in doubt is what we will choose to do about it.

One of the two major party candidates for president has a detailed set of policies to address climate change, and one candidate doesn’t believe the government should be looking for solutions to a problem he isn’t sure even exists.

The policy differences between the candidates is very evident. Even more clear is the fact that in the future we won’t be able to fall back on the excuse that we didn’t know the stakes.

We need not look any farther than our own backyard to understand the impact. Over the past decade we have seen how bark beetles have ravaged old-growth pine forests in northern Arizona as warmer summer and winter temperatures allow their populations to thrive where they once could not.

We have seen the dwindling reserves of water in our rivers, lakes, dams, canals and aquifers.

Record drought, wildfires and killer heatwaves clearly show that the impact of climate change isn't limited to the polar ice caps, sea levels, or the hurricanes that pound coastal regions. The impacts and the threats are everywhere.

Our ecosystem has limits, and we are pushing up against those limits. Profound changes are required if we are to avoid suddenly finding ourselves in a pot of boiling water of our own making.

Questions: How much weight will you give to a candidate's policies on climate change in the upcoming election? Can free enterprise solve climate change?