With the increasing number of Photovoltaic (PV) power systems being installed on buildings and the concern of emergency first responders (firemen) that these high voltages on buildings represent a hazard to first responders, the National Electrical Code (NEC) has added requirements intended to address this hazard. Many PV power systems use a design with many series connected PV modules (termed ‘strings’) to simplify wiring and increase efficiency. Presently these systems can use strings with cold open circuit voltages of up to 600 volts DC on residences, up to 1000 volts on non-residential buildings, and up to 1500 volts in utility scale installations. The problem is that even if the wires from the PV array are disconnected, high voltages remain and emergency responders could be exposed to high voltages even if all electrical power is shut off for the building.

To address this hazard, the NEC added Section 690.12 Rapid Shutdown of PV Systems on Buildings in the 2014 edition. The requirements were refined in the 2017 edition. Methods and designs for achieving the proper rapid shutdown are not addressed by the NEC but instead are addressed in the product standards (such as UL Standards) for this type of equipment. The figure below from the September/October issue of Solar Pro magazine (see solarprofessional.com) illustrates the requirements.

There are many ways that the PV industry is addressing these requirements:

Module Level Electronics (MLE), the inclusion of electronic devices within the PV modules:

Array rapid shutdown devices that are placed within the array boundary and disconnect the PV array whenever the inverter is shutdown.

Inverter location – simply placing the string inverter close to the PV array, within the array boundary. Inverters are being designed to allow such low profile mounting.

Activating rapid shutdown:  PV systems installed following either the 2014 or 2017 versions of the NEC will have a reflective label (left image) near the electrical service showing the switch that will put the PV system in shutdown mode.  This label may be either on the AC disconnect (center image- for systems that shutdown upon loss of the utility connection) or on a separate switch (right image).  PV systems using micro-inverter and installed following earlier NEC versions may not be labeled. 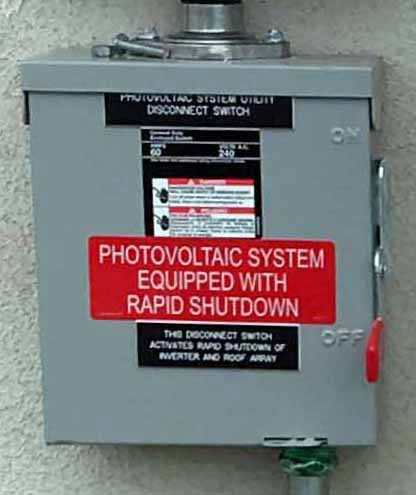 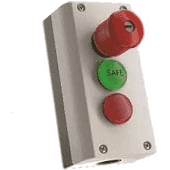