Arizona Public Service has spent nearly $11 million since last autumn to combat a renewable energy ballot proposal in its state, according to a new report from a liberal watchdog group.

Read the full article on UtilityDive.com

Battery powered homes may be future of homebuilding

Please read this link at The Daily Courier, Prescott, Arizona 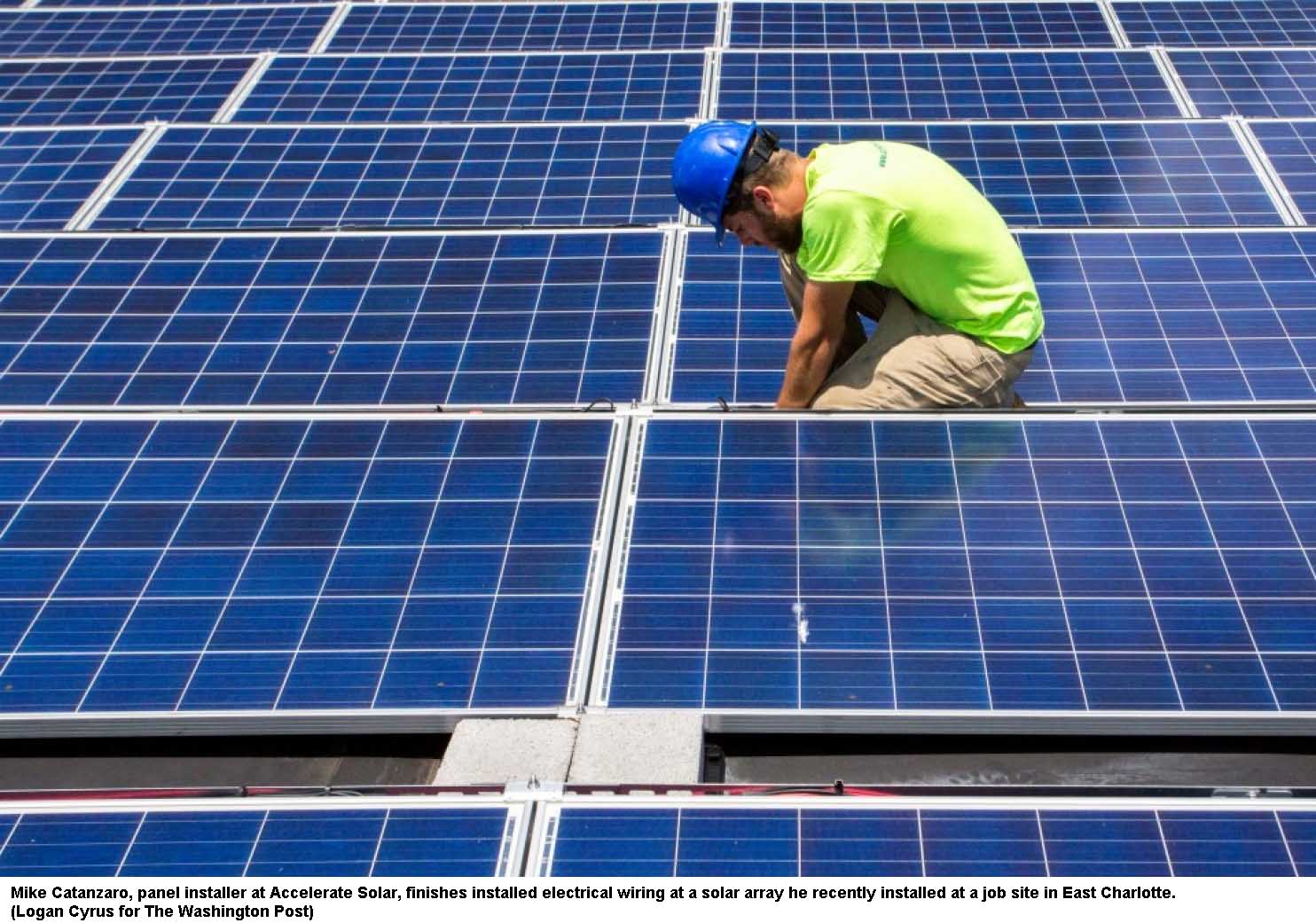 CHARLOTTE — Mike Catanzaro, a solar panel installer with a high school diploma, likes to work with his hands under the clear Carolina sky. That’s why he supported President Trump, a defender of blue-collar workers. But the 25-year-old sees Trump’s withdrawal from the Paris climate agreement as a threat to his job.

“I’m a little nervous about it. The solar business is blowing up and that’s great for a lot of people around here,” Catanzaro said, just after switching on an 86-panel array atop a brick apartment building.

“I was in favor of Trump, which I might regret now,” he said. “I just don’t want solar to go down the wrong path.”

While some employed in particular industries have celebrated the U.S. exit from the Paris agreement, the responses of workers such as Catanzaro add a considerable wrinkle to Trump’s promises that scrapping the accords could save millions of people “trapped in poverty and joblessness.”

The more complicated truth, experts say, is that while there could well be some winners — such as workers in the coal industry — the Paris departure embodies the government’s abandonment of a suite of policies that promised to create hundreds of thousands of  jobs at the same time as fighting climate change.

About 370,000 people work for solar companies in the United States, with the majority of them employed in installations, according to the Department of Energy. More than 9,500 solar jobs have cropped up in North Carolina alone, the study found. That’s more than natural gas (2,181), coal (2,115) and oil generation of electric power (480) combined.

The country today has roughly 51,000 coal mining jobs, a sharp fall from 89,400 in 2011, according to the Bureau of Labor Statistics. The latest jobs report, out Friday, showed coal mining added 400 jobs in May.

Not everyone in the renewable industry will be affected by the departure from the Paris accord. Major players in the power industry, such as Duke Energy, a utility based in Charlotte that has heavily relied on coal in the past, say they remain committed to moving away from the older, more polluting sources of energy.

But Trump’s move could be devastating for small-scale operators like Catanzaro’s employer.

Catanzaro, 25, quit college after his first semester and has been as a technician in the solar industry for most of the time since then, most recently doing electrician's work. He found his current job at Accelerate Solar five months ago on Craigslist.

“It’s the energy of the future,” Catanzaro said. “I mean, really: It’s electricity from the sun. It’s self-sustaining.”

Solar is a rare expanding blue-collar opportunity in North Carolina, said Jason Jolley, an economics professor at Ohio University who grew up in the state.

The state’s traditional blue-collar sources of employment — tobacco, textile and furniture manufacturing — have all declined since the nineties, in part because of cheaper labor abroad.

Catanzaro’s job pays about $20 an hour, but offers no benefits. His $40,000 a year annual wages are in the same range as the older blue-collar jobs. Workers in North Carolina’s furniture factories earn an average salary of about $39,300. Those in tobacco make about $45,000.

North Carolina generally doesn’t employ coal miners, but if Catanzaro found work as a coal miner in West Virginia he could expect to earn $55,000.

He is earning enough to rent a four-bedroom house for his wife and three children, and is hoping to save up enough to pursue his electrician’s license. That will open up a more lucrative path in the solar field, he said.

Summer, meanwhile, is overtime season — “the top of the solar coaster,” as he says — and Catanzaro said he hopes to work at least 50 hours per week until fall.

Chris Verner, co-founder of Accelerate Solar and Catanzaro’s employer, got his start as a college student in Vermont, setting up a business after graduation that took advantage of green energy rebates under an Obama-era stimulus package.

He said he is hoping to double his 20-person installation team this year.

Verner’s experience reflects the growth of the solar industry across the United States.

An analysis last year from the Solar Foundation found solar jobs in the U.S. have jumped at least 20 percent annually every year since 2012.

Duke Energy said Trump’s decision to pull out of the Paris agreement hasn’t affected its plan to reduce carbon emissions 40 percent by 2030. It has already closed half of its coal-powered plants in North Carolina.

“We plan our system and our investments over decades to deliver reliable and increasingly clean power to our customers at affordable rates,” spokeswoman Dawn Santoianni said in a statement. “Reducing emissions cost-effectively and delivering on our commitment to a lower carbon future remains an important tenet of our investment strategy.”

Solar technology had been around for decades but the industry really only took off in the United States in 2006 after George W. Bush introduced the solar investment tax credit, offering a 30 percent tax credit for businesses and homeowners. The credit — reauthorized by Congress in 2016 — has been extended through 2021.

“I think it definitely became more mainstream while he was in office,” Casey said. “I couldn’t speak to cause and effect but the administration was very good about promoting good policies. I think we have an openly hostile administration today.”

Verner and Catanzaro have already seen how policy shifts can hurt their business.

Catanzaro, the installer, was laid off from his first job in the solar industry last year after his company left the state, citing a tough regulatory environment, including North Carolina’s law that allows only utilities to sell electricity to customers.

Verner took a hit around the same time when Republican legislators in the state let its 35 percent tax credit for renewable energy investments expire, saying the industry could stand up on its own.

Business in North Carolina fell sharply forcing Verner to refocus his home installation business on South Carolina. The border is a 15-minute drive from his Charlotte office.

“We’ve had a ton of customers that are concerned — will they be able to get their tax credits?” he said. “It makes them a lot more skeptical that they’ll be able to get those when they complete their project.”

In a Thursday speech, Trump lamented the decline of coal, which has claimed livelihoods from West Virginia to Wyoming. He blamed it on environmental regulations and Obama’s commitment to renewable energy.

“We are effectively putting these reserves under lock and key, taking away the great wealth of our nation,” Trump said of clean power measures, “and leaving millions and millions of families trapped in poverty and joblessness.”

The president said complying with the Paris agreement would cost up to 2.7 million jobs by 2025, citing a study from the National Economic Research Associates, which was funded by the U.S. Chamber of Commerce and the American Council for Capital Formation, both of which opposed the deal.

Trump did not account for jobs that would be created as a result of the transition to a clean energy economy.

Economists say coal jobs started disappearing decades ago, a decline that deepened as natural gas got cheaper, thanks to the rise of fracking and horizontal drilling. Electricity companies began shutting down coal-powered plants and switching to natural gas, further driving down the demand for coal.

Duke chief executive Lynn Good has said the company has no intentions of reviving its coal use. “Our strategy will continue to be to drive carbon out of our business,” she said in an April speech.

Trump supporters believe the president’s decision to exit Paris will help restore the nation’s coal jobs. In an interview with CNBC, Gary Cohn, the director of Trump’s National Economic Council, predicted opportunities will return for miners: “Coal will be competitive again.”

S.T. Karnick, director of research at the Heartland Institute, a right-leaning Illinois think tank, said that the possibility of new solar jobs wouldn’t make up for the loss Kentucky, Pennsylvania and Ohio have experienced.

“The promise of employment 10 years or more down the road rings hollow to people who have already lost their jobs — and see all the new tech employment gravitating to San Francisco and other places they’ll never even get to visit, much less find jobs in,” Karnick wrote in an email.