While blog entries are initiated by the Solar Center, we welcome dialogue around the posted topics. Your expertise and perspective are highly valued -- so if you haven't logged in and contributed, please do so!

Welcome to the Arizona Solar Center

Guest
Introductory
This is your source for solar and renewable energy information in Arizona. Come explore various technologies, including photovoltaics, solar water heating, solar architecture, solar cooking and wind power; keep up to date with the latest industry new...s; follow relevant lectures, expositions and tours via our events calendar. Whether you are a homeowner looking to become more energy efficient, a student learning the science behind the technologies or an industry professional, we know you will find valuable information here. This Website is presented by the Arizona Solar Center, a non-profit, non-partisan organization whose mission is to promote the use and utilization of solar energy. More
Continue reading

Washington DC -- According to the latest issue of the "Monthly Energy Review" by the U.S. Energy Information Administration, production of renewable energy for the first third of 2009 (i.e., January 1 - April 30) was six percent higher compared to the same time period in 2008. Moreover, in April 2009 alone, renewable energy sources accounted for 11.1 percent of domestic energy production and exceeded the amount contributed by nuclear power.

An attractive feed-in tariff incentive and rapidly decreasing solar module prices have made Italy the most attractive PV market in the world. This year, Italy is set to become the world's second largest PV market after Germany, the undisputed leader.

How Not to Install Batteries - Connection Considerations

How Not to Install PV - Shadow Considerations 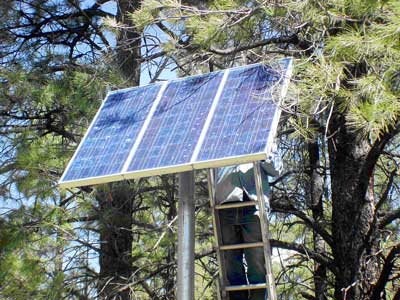 This PV array was installed under a tree and as a result the branches of the tree were casting shadows on the PV modules.

How Not to Treat Batteries - Maintaining Battery Electrolyte Levels 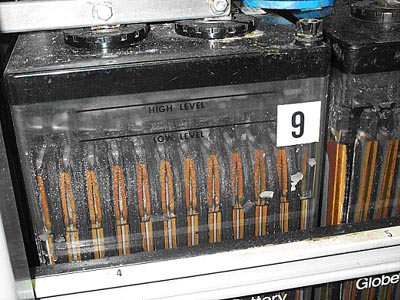 During normal operation, water is lost from a flooded lead-acid battery as a result of evaporation and electrolysis into hydrogen and oxygen, which escape into the atmosphere. One Faraday of overcharge will result in a loss of about 18 g of water per cell. Evaporation is a relatively small part of the loss except in very hot, dry climates. With a fully charged battery, electrolysis consumes water at a rate of 0.336 cm^3 per cell per ampere-hour of overcharge. A 5000-Ah battery overcharged 10% can thus lose 16.8 cm^3, or about 0.3%, of its water each cycle. It is important that the electrolyte be maintained at the proper level in the battery. The electrolyte not only serves as the ionic conductor, but also is a major factor in the transfer of heat from the plates. If the electrolyte is below the plate level, then an area of the plate is not electrochemically active; this causes a concentration of heat in other parts of the battery and “Sulfation” of the dry portion of the plates which may not be reversible. Periodic checking of water consumption can also serve as a rough check on charging efficiency and may warn when adjustment of the charger is required.

How Not to Do It

Following is a collection of common mistakes made when installing solar electric systems.

Berkeley, California - For the fourth consecutive year, the U.S. was home to the fastest-growing wind power market in the world in 2008, according to a report released today by the U.S. Department of Energy and prepared by Lawrence Berkeley National Laboratory. Specifically, U.S. wind power capacity additions increased by 60 percent in 2008, representing a $16 billion investment in new wind projects. "At this pace, wind is on a path to becoming a significant contributor to the U.S. power mix," notes report author Ryan Wiser, of Berkeley Lab. Wind projects accounted for 42% of all new electric generating capacity added in the U.S. in 2008, and wind now delivers nearly 2% of the nation's electricity supply.

Two more bills (HB 2332 & 2336) to push demand for solar and renewable energy in Arizona were signed by Gov. Jan Brewer over the weekend...

By submitting your company and personal information to the Arizona Solar Center Resources Directory, you confirm that the information you are providing is accurate to the best of your knowledge.
With your submission, you are also acknowledging the following:
Advertising Services
Privacy

This video examines solar water heating. Solar water heating is one of the most cost effective ways to use solar energy. Though there are many different types of solar water-heating systems, the basic technology is very simple and illustrated in this video.

Plugging into the Sun

This video explores the various uses for photovoltaics cells. From the solar powered calculator to radios, water pumping, street lighting and household use, the photovoltaic cell has found a wide variety of niches throughout modern day society.

Masters of the Sun

This video traces solar development from the Hohokam Civilization - a Southwest desert culture which began about 200 years before Christ - through other southwestern native cultures whose architectural structures were built with a remarkable sensitivity to the sun’s daily and seasonal movements..

Pioneers of the Sun

This video examines early efforts to utilize heliograph communications and solar energy in the state of Arizona and includes reenactments of their original uses. The heliograph was one of the first solar experiments in territorial Arizona. In the late 1880s, the U.S. Cavalry employed the heliograph during hostilities with native Americans. Solar developments in Arizona during early part of the 20th century are also explored, from the Eneas Engine and the Day & Night solar water heater to solar cookers and passive solar architecture. Pioneers Arthur Brown, John Yellot, Sherry Cole and Barbara Kerr are recognized for their contributions to solar development in Arizona and elsewhere.

In a major victory for solar advocates in the state, Arizona Governor Jan Brewer today signed SB 1403 into law.

The bill extends tax credits and other incentives to manufactures of renewable energy equipment (mainly solar) if they locate in Arizona and meet other criteria...

The Status of Renewable Resources and Development in Arizona

The presentation summarizes the measurement of renewable resources and the status of their development in Arizona, as well as the effectiveness of the state Environmental Portfolio Standard. The material contained in the presentation was current as of August 2003.