Ninety-three million miles away, the sun blazes energy toward Earth. When this energy reaches Earth, the energy transmitted in short wave-lengths (visible light, ultraviolet, etc.) penetrates our atmosphere and strikes the Earth's surface. Energy in long wavelengths (such as infrared, thermal radiation or heat) is absorbed by carbon dioxide and other gases in the atmosphere. When penetrating short wavelengths strike Earth, they are converted into long wavelengths (in the form of heat radiation) and reflected back toward space. Some thermal radiation escapes, but most of it remains trapped inside our atmosphere. These long waves build up and keep Earth warm. This phenomenon, known as the greenhouse effect, enables life to flourish on Earth. Its future effects are also the subject of much discussion. 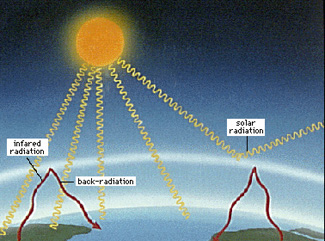