It's as if the star characters of the kid's game "Rock, Paper, Scissors" finally figured out that working together can be a whole lot more productive (and fun!) than one always ending up as a loser.

The concept isn't new, but thanks to Arizona's Barry J. Fuller it's now becoming news. Through his videos, hands-on workshops, downloadable DVDs, construction plans and BetR-bloks, Fuller is helping papercrete emerge from the realm of backyard do-it-yourselfers into a commercial product.

It's an environmental win. The mixture upcycles discarded paper — of which the United States still tosses 55% of what it uses (48 million tons annually) into landfills instead of recycling it — and turns it into a viable building product with a superior insulation value. Figuring conservatively, it takes approximately 15 trees to create a ton of paper. Do the math: that means 720 million trees are used once and then buried for eternity in a landfill each year. 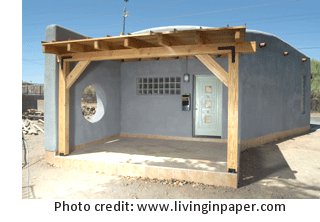 First patented in 1928, the material's popularity revived in the 1980s. Fuller's fascination with the material began in 2003 when he was looking for a low-cost alternative construction material to build a home on a remote acreage in the Aquarius Mountains near Wikieup, Arizona. He had investigated many other alternatives and decided on papercrete because it fit extremely well with solar energy as part of his overall plan to be totally independent.

An alternative materials specialist, experimental designer and builder, Fuller is also a media producer. His website, livinginpaper.com, is an offshoot of his documentary currently in production built around interviews with papercrete experts throughout the Southwest and California over the past few years. He's taught film and video production at Arizona State University, and co-authored a Simon & Schuster textbook on single-camera video production.

Fuller is conducting on-going research on a newer iteration of papercrete with Donald Herring at the Herberger Design School at Arizona State University. He and his partner Christopher Frettoloso designed building plans, currently being engineered by Caruso Turley Scott, and have received preliminary approval to build homes in Pinal County, Arizona.

While the material will require further testing before it can be used in commercial or large-scale housing applications, it has been accepted in a number of Arizona cities and towns and in other states. In general, it is permitted in post and beam construction, where the roof is supported by wood or cement columns and papercrete is used to fill in the wall area between the columns.

In addition to providing better insulation and lower embedded energy by using the sun's power to "cure" it, papercrete is much lighter than traditional concrete blocks. According to Fuller, one person, working alone, can build a home with papercrete, "but to build even a small structure you have to be able to mix a sizable amount of it easily and inexpensively." He recommends constructing a tow mixer, one that can tear up large amounts of paper and even a 94-pound bag of unopened Portland cement with ease. The mixer video, the first of eight DVDs on the process, outlines exactly how, using $500 worth of parts and some welding skills, to build a tow mixer in about four hours. 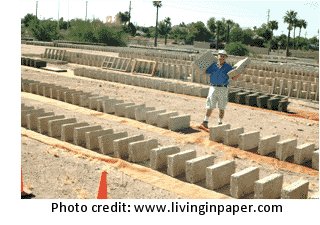 The DVD series teaches would-be builders everything about the process, from making the actual blocks and roof panels to building a foundation and walls to incorporating doors, windows, electrical, and finishes.

"In our structure, we installed several large glass block windows," Fuller said. "No one had tried it before, so we had to figure it out, and we show the process step-by-step."

Finishes are tricky too. "There is a lot to learn — and avoid — when working with papercrete and non-papercrete finishes, and we show how to do it with specific mixes that work properly without cracking."

Experimentation with stucco revealed the best wire type and fasteners, the mix that looks and works best, and the ideal way to seal it.

Sealing is most important on the roof or other horizontal areas where water can pool; it’s not as important on vertical surfaces where water simply runs off. Papercrete is ideal in dry climates, but it works in climates other than the desert Southwest as well. The website quotes satisfied owners from damp Missouri, snow country in North Dakota, and the mountains of California.

Fuller's research and work is featured in a chapter entitled "Homes from Waste Paper" in The Art of Natural Building, an encyclopedia of techniques for non-professionals as well as architects and designers. He offers hands-on workshops at a research facility in Maricopa, working through actual production of forms, blocks, finishes and more, and through lectures and tours of Paper Palace One, a structure designed to test papercrete's flexibility, in Tempe.

Problems with some alternative building materials can emerge over time, such as the compaction issues users experienced with straw bales. Initially touted for its superior insulative properties, walls built with the bales compacted under roof weights, causing gaps that negated the benefits.

Papercrete doesn't compact, as demonstrated in both the lab and in projects. "Test results proved that papercrete is more than adequate for two-story load-bearing residential construction," Fuller said. "And they also show the R-value of our walls is even higher than we thought, coming in at 3.01 per inch, which is about R-36" and nearly doubling the standard R-19 value of walls in new wood frame construction. 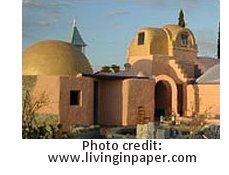 Anecdotally, papercrete homeowners in northern New Mexico can attest to its insulative properties. Although they remembered to turn off the heat, artists Barbara and Mike Thomas forgot to leave the south curtains open in their passive solar home before they left on vacation for the last three weeks in December. Even with temperatures dipping to between 3 and 15 degrees at night and never above 40 during the day, they returned on New Years Eve to a comparatively warm 54-degree house.

It's apparent Fuller believes in papercrete's possibilities wholeheartedly. In recent years he has shifted gears to working toward the commercialization of it, marketed as BetR-blok. According to Fuller, BetR-blok "saves on construction costs because it is self-insulating and requires less finish work. It is significantly less expensive than its nearest competitors — ICFs (Insulated Concrete Forms) and AACs (Autoclaved Aerated Concrete)."

Fuller, with fellow papercrete advocate Frettoloso, conducted a BetR-blok Kickstarter campaign last fall to solve production challenges, explaining that "in the investment world, we are technically at the stage of development called 'The Valley of Death' – between the Proof of Concept stage and Commercial Viability stage...the point where a company has a proven product, but isn’t quite far enough along to attract significant investment."

Although it fell far short of the $90,000 the two hoped to raise to automate production, Fuller and Frettoloso "learned a lot" and plan to try again. The two have raised more than $150,000 in other grants and competitions, and both are convinced that the product has a great future. "When the BetR-blok manufacturing process is fully automated, its price will be directly competitive with wood-frame stucco. It’s only a matter of time before green materials like papercrete and BetR-blok will be mandatory rather than elective,” Fuller said.

With its potential cost savings and lighter environmental footprint, papercrete seems like an idea too good to go to waste.

Question: What are some other environmentally-friendly products/technologies that had their origins in Arizona?

Jen Baker works as a Sustainability Analyst for the City of Raleigh, North Carolina. Jen is a graduate of Arizona State University and the University of Iowa.

Partial Eclipse of the Sun: The Good Solar vs Bad Solar Conflict

The Clean Energy Story of 2014: There is No Planet B